I was recently asked by someone if I could provide some tips on photographing the Northern Lights. Rather than keep these thoughts between us, I thought I would dish out and elaborate on some of my insights from photographing the Aurora in Iceland.

Iceland is one of the more accessible places to view the Aurora and despite its name, its nowhere near as cold as many of the other popular Northern Lights destinations in Northern Scandinavia and Canada. That said, it can still get uncomfortably cold so before you step outside make sure you are wrapped up warm with layer upon layer of clothing. Have some gloves which protect your fingers from the cold but do not restrict your ability to operate the tiny buttons on your camera.

Prior to setting off, check out http://en.vedur.is/weather/forecasts/aurora/ a website operated by the Icelandic Met Office which receives updates throughout the day from a satellite measuring the strength of the solar winds. These winds carry tiny charged particles through space that are given off by the the sun and when they collide with the Earth's atmosphere, the Aurora Borealis is born. They forecast on a scale of 1-9, with 0 producing nothing and a 9 being a very intense display. The shots in this post were taken when activity was somewhere between 1 and 4 so just imagine what a 9 would be like! The website also has excellent mapping of the expected cloud cover over the country. If the weather is looking unfavourable where you are, look for where the skies are clear and be prepared to do a lot of driving. Make sure your Satnav software is up-to-date to avoid getting lost on an unpaved road at 2am in the middle of nowhere panicking about whether your hire car is going to make it (sorry Avis). Iceland has many unpaved, pot-holded roads and some Satnavs don’t differentiate between a tarmac road and a gravel road that has more dents in it than a golf ball. 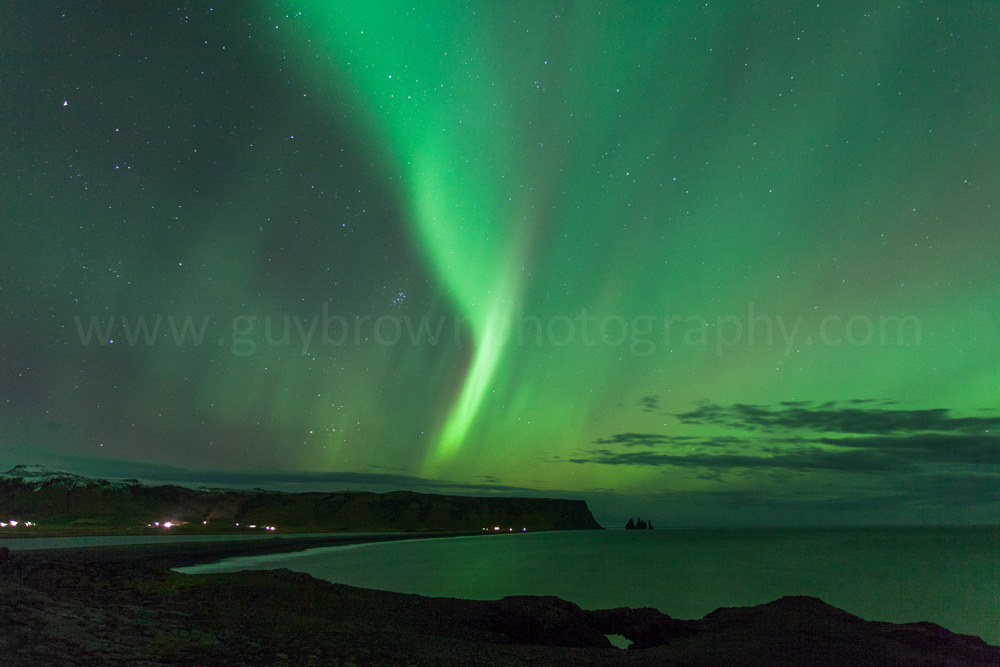 The Aurora over Vik, Southern IcelandAn impressive display over Vik even though no activity had been forecasted that night. In this shot I was able to use the lights from the small villages to ensure I was in focus.

Now get in your car and drive, drive, drive. You want to be as far away from those city lights as possible. You would be amazed how a high ISO setting or long exposure can pick up and exaggerate the faintest of orange glows from urban areas, miles away. In Iceland, you really don’t have to go far from Reykjavik. Thingvellir National Park is 45 minutes away and the Snaefellsness Peninsula is a two hour drive from the capital. Both of these locations are sparsely populated where towns and their light pollution are few and far between. Generally speaking, the more North you are the more intense the Aurora will be. Most of your locations are going to be near a main road so dump your car in a safe place and get away from the passing vehicles. Even the smallest amount of glare from headlights will ruin your shot as your camera’s sensor is hugely sensitive – this is also why the image you capture of the Aurora will appear more vivid than it does to the naked eye.

A tripod is a given and a remote shutter switch is also helpful. I tend to use the 2 second timer function as I'm always breaking remote cords, plus its one less accessory to fumble with and loose in the dark.

Try not to use a torch or the light from your car as you will lose your "night vision" and each time you turn the light off, your eyes will need a few minutes to re-adjust to the dark. A good trick if you do need to use the light is to keep one eye shut whilst the light is on, thus retaining night vision in that eye. 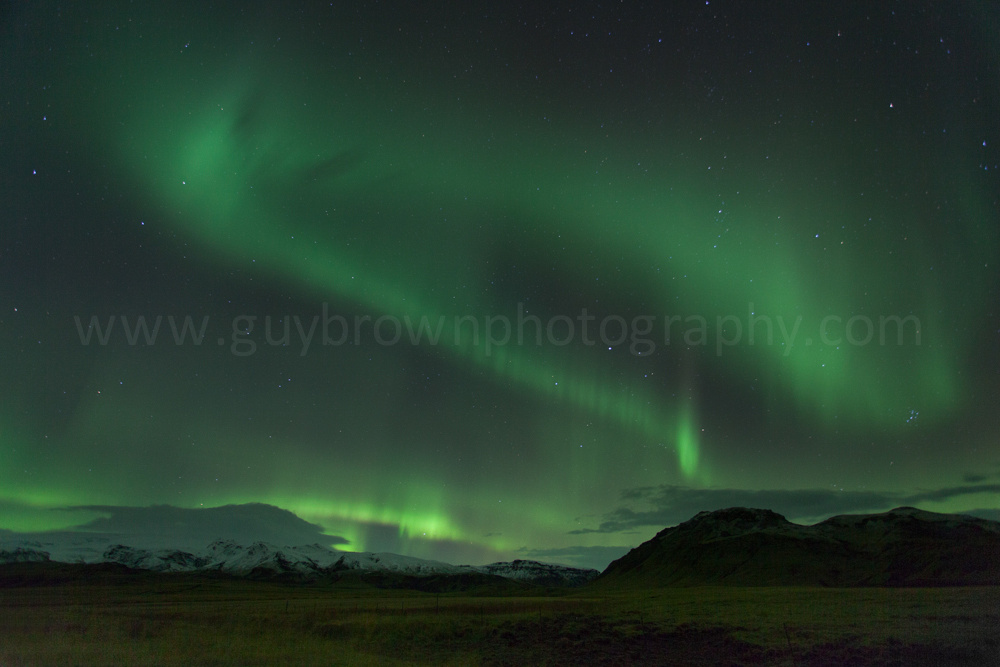 The Aurora over Southern IcelandThis was one of my first successful shots of the Northern Lights. As no activity had been forecasted for that night I hadn't scouted out any interesting locations. I resorted to pulling off the main road and walking through a field until I was far away from the headlights from the passing cars.

Turn on the mirror lock-up function so that when you take a photo your camera does not have any un-necessary vibrations from the clunky mirror flicking up at the start of the exposure. This can cause a tiny amount of camera shake which can potentially reduce the sharpness of your image.

It will hopefully be pitch black where you are, so focus using autofocus by finding a light, the moon, or anything far in the distance which the camera can successfully lock onto. Once you have focused, turn your focusing to manual so that your lens doesn’t start searching in the dark in autofocus mode - this can be a real pain if you have found a composition which you like, but have to move your camera to again find that object in the distance to focus on.

Using an ISO of 800 or higher allows the camera not only to gather more light, but allows for a quicker shutter speed. If there are clouds in the sky that are moving I tend to go for a quicker shutter speed with a higher ISO. Doing so means the clouds don’t blur which I find ruins the contrast between the lights and the clouds as the long exposure effect tends to make the clouds look more like a white version of the Aurora. Through trial and error, work out a shutter speed that is going to keep your clouds pin sharp; I can't suggest a speed as it all depends how fast the clouds are moving.  The other downside of using a longer shutter speed is that the stars may trail - I like my stars pin sharp. Star trails are great on their own but a really intense Aurora display will be blown out if you are exposing for hours at a time to capture trailing stars. If you have a cloudless sky, you could expose for longer and potentially capture more of the Aurora’s movements over the course of the long exposure. It’s worth turning on the camera’s noise reduction feature as a photo at ISO800 for 30 seconds can become quite grainy and will reduce the quality of your shot and the options you have when it comes to editing.

The moon can add another dimension to your photo. Many think a full moon is detrimental to photographing the Aurora but I disagree. By having the moon behind you, it can actually provide a wonderful fill light for your landscape.

Just remember, Aurora sightings are far from guaranteed; even with clear skies the Aurora may not come out to play so manage your expectations before going if you wish to avoid disappointment. Even without the Aurora, Iceland is an incredible country to visit with plenty of subjects to keep you clicking. 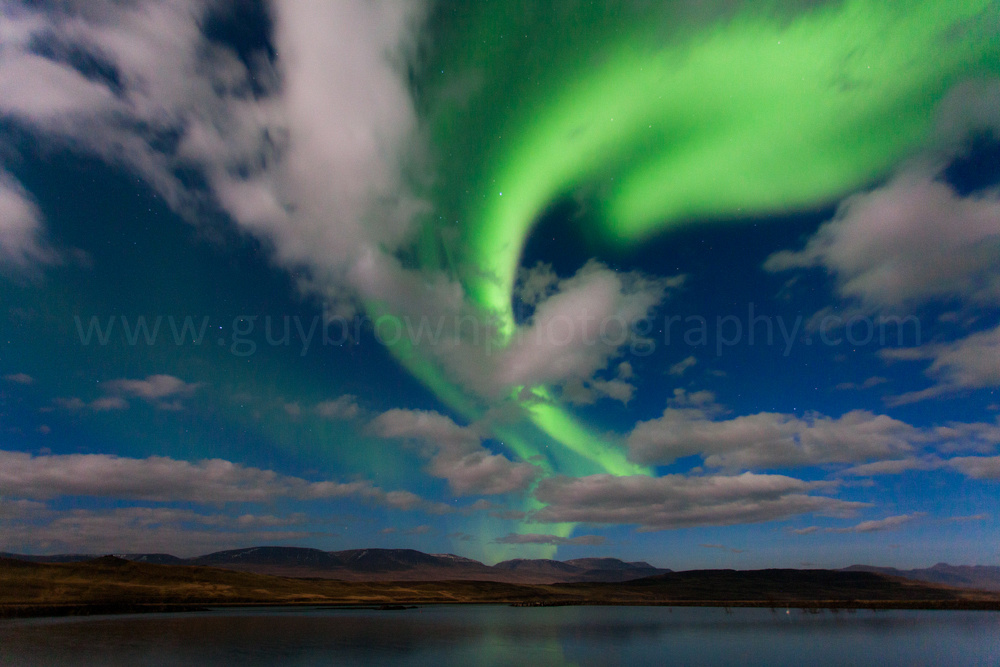 Northern IcelandThe Aurora puts on an incredible display near Akureyri in Northern Iceland. The full moon was behind me and as you can see, it provided a small amount of light to illuminate the landscape.